HERE’S THE PLAN: to pull out a book from my tight-packed bookshelves and share it. Qualifications? It has to be one I’ve read over and over again, one that has inspired my own writing, and one that gave me a lasting experience of some sort. There are so many older books that are just too damned good to be buried in the mosh pit of publishing fashions and frenzies. So I’m going to pull them out and have another dance with them. And hopefully encourage others to do the same.
~~~~~~~~~~~~~~~~
Since it’s only seems right to have these first Retro Recs posts feature authors who have one way or another deeply influenced both my reading and writing, then Mary O’Hara makes up the third, but certainly not the least, of my Three Hail Marys. O’Hara is perhaps best known for My Friend Flicka, a novel that has spawned several movies–few of which, unfortunately, do justice to the rich layer cake of characterisation that is O’Hara’s work. Not as many, however, realise that Flicka was the first of a trilogy; a coming-of-age tale concerning a boy named Ken McLaughlin, his family, their ranch in Wyoming and, most of all, the horses that rendered so many truths of living. The titles are, in order:

These books are often marketed as ‘children’s books’, true; but when they were published, there wasn’t the same demand to classify everything into overly-simplistic categories. Whether we as readers (sorry, I refuse to use the word consumers–like books are cereal! Hardly!) have learned our over-entitlement through such rabid labelling is a topic for another time. Suffice it to say, when growing up I thankfully didn’t have sharp-cornered boxes indoctrinating what was ‘proper’ to read. My library shelves were separated by reading levels and topics and… really, that was about it. A prodigious reader from the age of four (that’s what my parents told me, anyway), I read books. From every shelf in the library I could reach.

And, like almost every ‘children’s book’ of that era, these wonderful novels contained something for every age of reader. Naturally there were things in the text that as a child I didn’t comprehend and glossed over. They are a product and a slice of their time. That was–and is–the delight. So many little gems contained in these paragraphs and this story; so many layers upon layers of sheer characterisation and storytelling brilliance. The whole trilogy is the kind of book you want to keep on your shelves and reread. Each time you do, you glean something more.

As I’m sure you can tell by now, I dearly love these books. I have the first set in early edition hardcovers (c) 1941, given to me by a dear family friend when I was perhaps eleven. 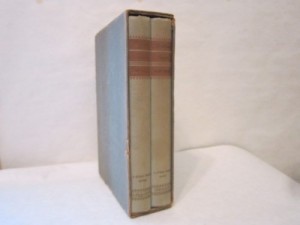 So, after a hard choice from three examples of mind-blowing and amazing craft, it was Thunderhead that came to the fore. Granted, I do tend toward the middle of many trilogies; perhaps because that’s where the emotional stakes ramp up the most and things spin out of control. In Thunderhead were all the pivotal points of any good bildungsroman: insubordination, a family crisis amidst the hardships of ranch life, thwarted hopes and stubborn dreams… and a focus upon which to fasten one’s love and pain and hopes.

The latter in particular is an ugly white colt named Thunderhead, called the Goblin and as much an outsider as his abstracted young master, Ken.  Ken has, in the colt’s birth, set his heart upon raising a race horse that will bring his parent’s ranch out of overweening debt. Both colt and boy come into their proper destiny in ways neither can foretell. But the story isn’t just about Ken. His mother and father, his elder brother, the ranch hands, even the brilliantly-described countryside itself… all are living, breathing individuals. None are perfect… and you care about every single one of them.

O’Hara had a way with them that was sublime. They weren’t cutesy, overly anthropomorphic cartoons, their thought processes just understandable enough, yet alien, too. Horses are not humans. That very difference should be given honour. O’Hara does, as can only someone who has spent their life around horses and beneath the wild skies of a barely-tamed land: 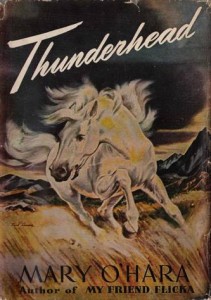 ~~~~~~~~~~~~~
From these books and this author, I learned that words could give animal the souls I knew they possessed. From animals–and lifetime of being around them–I embarked upon the never-ending process of acquiring that all-important skill set of speculative and historical fiction: writing Other. More importantly, I gained empathy and the stark, important realisation: that Other isn’t separate from an undeniable semblance of Self, yet it still possesses–and must maintain–its own rights, honour, and presence.

Posted June 14, 2018 by JTullosHennig in category "Offerings of the Writing Kind", "Retro Recs", "Travelling Through Time