For various reasons, I haven’t done any Retro Recs in quite some time. I’d the best of intentions, but life happens. So I’m reinstating it, here and now, with a re-posting of the originals to start it off.

HERE’S the plan: to pull out a book from my tight-packed bookshelves and share it. Qualifications? It has to be one I’ve read over and over again, one that has inspired my own writing, and one that gave me a lasting experience of some sort. There are so many older books that are just too damned good to be buried in the mosh pit of publishing fashions and frenzies. So I’m going to pull them out and have another dance with them. And hopefully encourage others to do the same.
——–
To choose Mary Stewart was a no brainer, actually, though it was difficult to pick between what I call ‘my rosary of three Marys’ (Stewart, Mary Renault, and Mary O’Hara). But once I decided which Mary, it was a little easier to pick the book. I’m sure others will come into play at a later date, but this time, it had to be The Ivy Tree.

The cover is from those aforementioned bookshelves, (c)1961, this is the first US printing in 1963. Isn’t this cover just deliciously (and a bit painfully) ’60s gothic? From the sweeping cape and hair to the Barnabas Collins coat and the uphill, defiant pose?

Back cover copy: If Mary Grey looked so much like the missing heiress, why should she not be the heiress? To the lonely young woman–living in a dreary furnished room–the impersonation offered intriguing possibilities… So plain Mary Grey became the glamourous Annabel Winslow. Only someone wanted Annabel Winslow missing… permanently.

“If you stood on the low piece of crumbling wall that enclosed the trunk, you could just reach your hand into the hole. I held on to the writhen stems of the ivy with one hand and felt above my head into the hollow left by some long-decayed and fallen bough. I put my hand in slowly, nervously, almost as I might have done had I known Julie’s owl and seven mythical young were inside, and ready to defend it, or as I might have invaded a private drawer in someone’s desk. The secret tryst; Ninus’ tomb; the lovers’ tree; what right had a ghost there, prying?”

This Saturday, 10 February 2018 at 1:00 pm, I’ll be at Barnes & Noble in Bellingham with Ginn Hale and Nicole Kimberling. We’ll be signing books, swapping stories and generally causing all sorts of literary mayhem. 😉

Just click the Horned Lord for more info, and hope to see you there.

For e-books 1-3 of The Wode on sale: #RobinHood, #historicalfantasy, #queerpagans, and so much more! 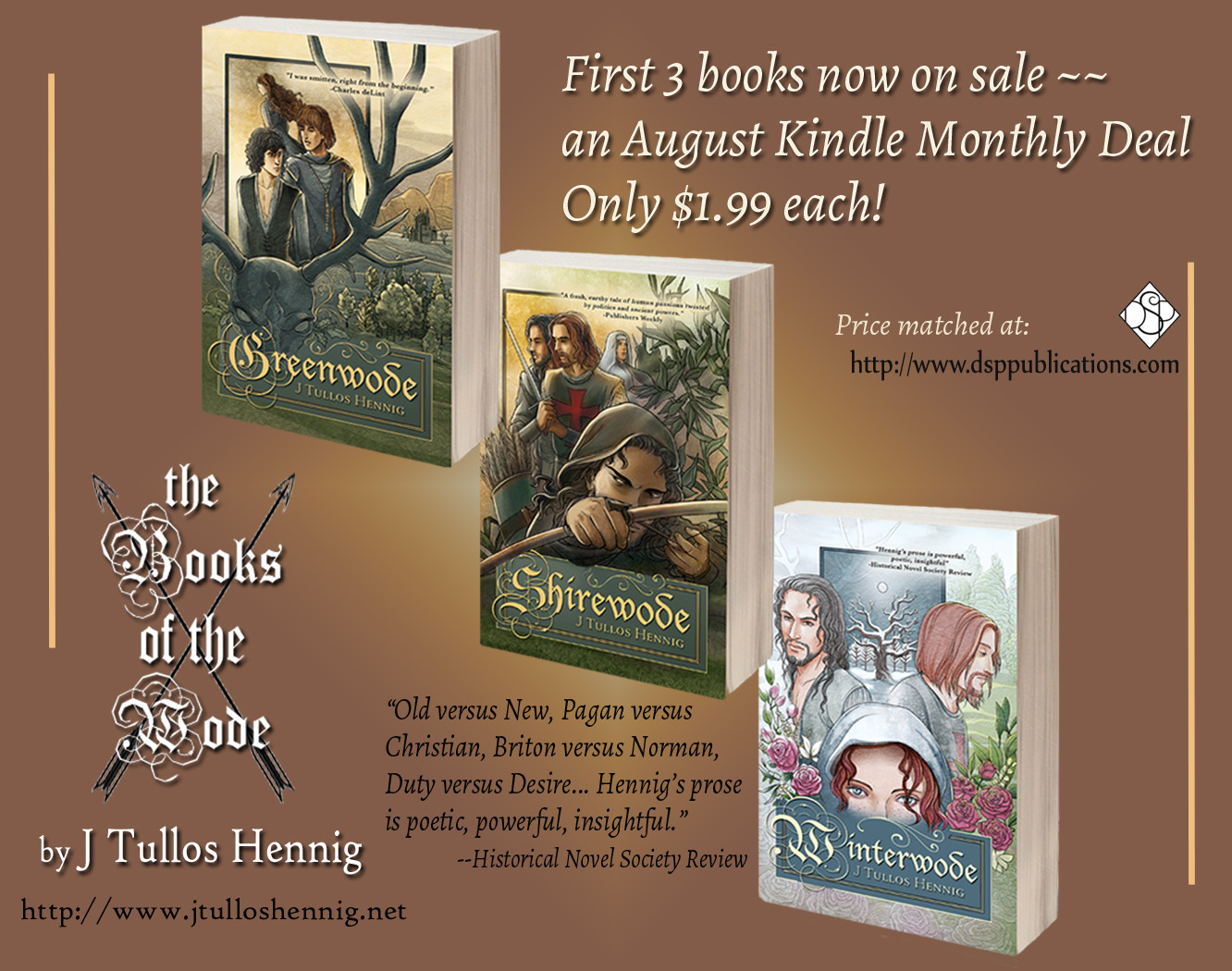 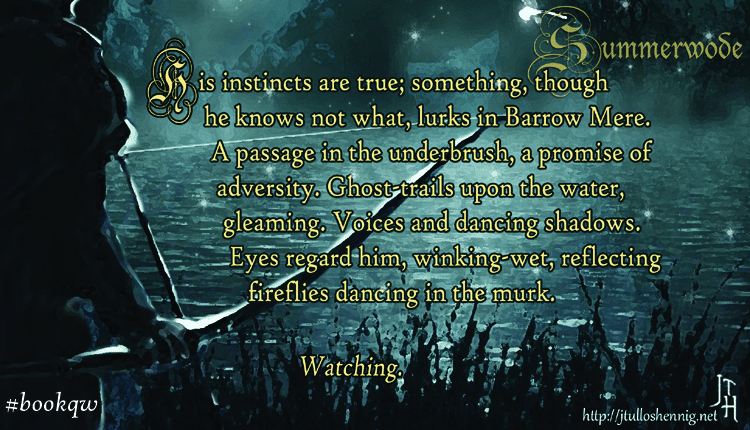 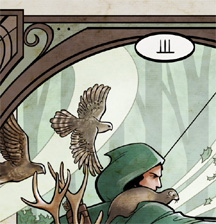 …at a very special bonus for Friends of the Wode!

You can participate in the launch of Summerwode, the newest in the Books of the Wode.
#robinhood @dsppublications #wodebooks
~~~~
You can receive, as a thank you from me, a set of four limited edition Tarot cards especially designed by cover artist Shobana Appavu.

(And yes, the above is a snapshot of one of them. They are beautiful!)

~~  The first 15 people who purchase a new copy of Summerwode (ebook or trade paper) AND send me an email copy of their receipt (jen AT jtulloshennig DOT net) will receive the 4 limited-edition debut cards of the Wode Tarot, PLUS the added bonus that all four will be signed by the artist as well as yours- truly-the-author.

~~  The next 30 people who purchase a new copy of Summerwode (ebook or trade paper) AND send me an email copy of their receipt (jen AT jtulloshennig DOT net) will receive 4 limited edition debut cards of the Wode Tarot.

I will notify you within the fortnight as to your gift and add you to my newsletter list for notification of future releases & special things. You send me a mailing address so your own set of cards can wing its way to you!
(And please be assured that I do not share any addresses, email or physical, of anyone who corresponds with me)

Tomorrow Summerwode launches!
THANK YOU for sharing my worlds with me!
*throws confetti*

Starting at the Musings home base, rather appropriately on Beltain and from here in my own rather-wet forest. For the Summerwode Book Tour kick-off, not only do I have a May Day sale (woot!) to share, but two things of Beauty.

First, a spoken poem by Damh the Bard. Even as Robyn dared his god to let his Summerlord be Lover instead of Enemy, in this lovely ballad the Oak and Holly choose words as their weaponry, not steel.

And in tribute to the meeting of Oak and the Devine Feminine beside the Summering fires, I want to share the beautiful work  of Natasa Ilincic, entitled, appropriately, Beltane. Please visit her site and check out the rest of her work at: natasailincic.com.

For details about the May Day Sale, please go HERE.

For dates, and stops for the Summerwode Book Tour, please go HERE.

Summer is a-comin’ in–with a Sale!

How apropos is this for May Day/Beltain? 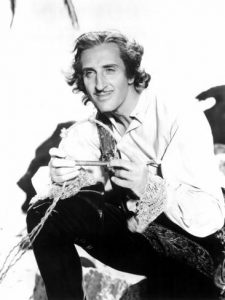 Spouse: This is so CHEESY
Me: But! Basil Rathbone! Fencing! With Errol Flynn!

Spouse: The Robin Hood movie is better.  And they both fence there, too. Robin and Guy
Me:  …
(as a certain Robyn and Guy snort at the idea of… and I quote… ‘poncy’ fencing technique)

Mr. Rathbone: (in uber-French accent, brandishing rope) “You know, you can screw a man’s eyeballs out of his head with one of these…”

Me: Now, my Robyn would appreciate that.
Spouse: More like your Guy would.

And that, my friends, is when you realise that Mr. Rathbone needs to be “cast”, somehow, as one of the Wode villains.

Care to guess who?

SUMMERWODE is available for pre-order! 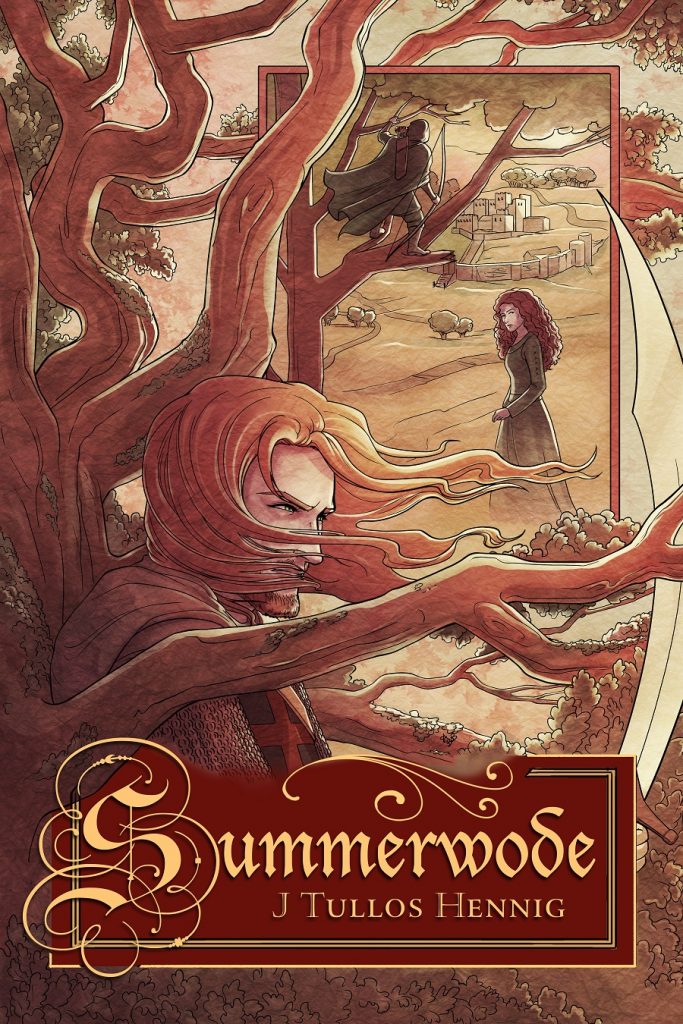 The Summer King has come to the Wode…
Yet to which oath, head or heart, shall he hold?

Once known as the Templar assassin Guy de Gisbourne, dispossessed noble Gamelyn Boundys has come to Sherwood Forest with conflicting oaths. One is of duty: demanding he tame the forest’s druidic secrets and bring them back to his Templar Masters. The other is of heat and heart: given to the outlaw Robyn Hood, avatar of the Horned Lord, and the Maiden Marion, embodiment of the Lady Huntress. The three of them—Summerlord, Winter King, and Maiden of the Spring—are bound by yet another promise, that of fate: to wield the covenant of the Shire Wode and the power of the Ceugant, the magical trine of all worlds. In this last, also, is Gamelyn conflicted; spectres of sacrifice and death haunt him.

Uneasy oaths begin a collision course when not only Gamelyn, but Robyn and Marion are summoned to the siege of Nottingham by the Queen. Her promise is that Gamelyn will regain his noble family’s honour of Tickhill, and the outlaws of the Shire Wode will have a royal pardon.

But King Richard has returned to England, and the price of his mercy might well be more than any of them can afford…