It’s In The Water… 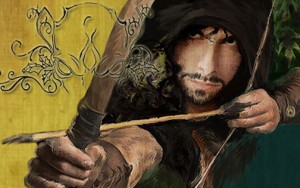 It’s humbling–staggering, actually–the way creativity channels itself; not only in our hearts and minds and consciousness, but in that undeniable cogency oft known as the ‘collective unconscious’.  Things really do bide in the ether, and surface in the water.

And right now, a certain Notorious Outlaw is making the rounds again.

Thankfully, that Notorious Outlaw makes those rounds on a regular basis.  You can peer back through history and see nice, fat clusters of storytelling.  It’s brilliant, in every sense of the word.  Because those of us who are fascinated by something, who study it and obsess over it, love, live, and breathe it, are always willing for more.  People who crave a well-told story will visit–and revisit–that story again and again.  Each incarnation gives us new cause for either shattering insight or groans of utter dismay, brings new adventures and causes… all with which we can ponder the outlaw Robin Hood.

And there is so much to ponder.  So much to explore and discover.  He’s in the water, all right: a water horse, a kelpie who’ll cozen you to back him then throw you in to drown.  Or, even better a pwca, a trickster who’ll give you that wild ride but perhaps relent, share some advice and goodwill to see you back home on wobbly legs.

You see, it was nearly thirty years ago when I wrote and nearly published my own first invocation and incarnation of Robin (or Robyn, even as the first book has always been called Greenwode).  England’s greatest archer was popping his wolfish head above the water then, too.  Some amazing novels came from that particular surge–Parke Godwin’s retelling being amongst my all-time favourites of any genre.  There were also movies: one so-so, one not-so.  A man who was to become my friend was, unknown to me and across the pond, working on a very magical Robin Hood at nearly the same time as I was working on mine.  Both of these were (and are) akin in their mix of historical tradition, high romance, and old magic.  His went on to be an award-winning (and breathtaking) television series; mine was not so fortunate, though it did nearly go to contract twice before ending up in a file drawer as the cycle waned.

Such are the hazards of publishing.  Of course, it was terribly disappointing at the time.  Yet bad luck can hold its own share of fortune.  Those books that almost were, now are–and all the better for it.  Even more, several years ago when I dusted off an old manuscript and decided to totally rewrite and structure it, it seems Robin was also dusting off the old longbow and taking aim back into the collective mainstream.  For now, nearly a year after Greenwode released (and just in time for today’s release of Shirewode), it’s happening again: new tales and retellings, little wildfires popping up here and there… quite apropos to a firebrand archer.  I’m sure the signs have been there for a while, but admittedly I’ve been spending more time larking my own ‘swete greenwode’.  Amidst my larking I’ve shaped a story which is beginning to garner some critical acclaim; a satisfying debut for a story that has been poking at my back brain for… well, for much of my life, really.  A strange thought, perhaps, to spend so much time in creation when our modern existence extols “hurry, put it out there, now!”  But I don’t find it strange, not at all, and it is my sincere hope many others will find my books, sit back… breathe… and enjoy the ride as much as I have.

Robin Hood–aka Robyn Hode–more than perhaps any other figure from myth or history, is discontent to merely bide in the depths of history.  In a very real sense he challenges it, both flaunts and mirrors what changes history and society would choose to reveal.  How fitting that a figure often connected with the Green Man would be so wrapped up in the spiral of the Eternal Return, both mythic and prosaic.  For someone whose historical existence is ever in doubt, Robin has the ultimate extant power: he sparks stories in those of us who are compelled to tell them.

Both in e-book and trade paper!
*throws confetti*

And of course, through my verra own author page at Dreamspinner Press:
JTH at DsP

Posted September 9, 2013 by JTullosHennig in category "Books", "Much Thinkery About Something