I Won’t Begin At The Beginning–

No, I really won’t.  Begin at the beginning, that is, because the beginning was bloody awful. United Airlines, I am looking at you.  Not that I’ll look at you again after this. Stuck in Houston for a day and a half… gah.

Instead, we’re going to merrily leap ahead and take the road to York. Two freaking days late (yes, I am trying to let it go…), but game. I’ll say it again: the road to York. The mere historical implications of it! Traversing the wake of the Great North Road, (with modifications, natch) used since before the Romans came in and, er, remodelled. Signs all the way up that made my ears prick: Nottinghamshire, Robin Hood Country. Sherwood. Blyth. Worksop. Sheffield. Hathersage. Selby, next door to Temple Hirst…

I know, it’s beyond silly. But every time I’ve been to the UK, even the mundane reality of road signs are markers to magic. The beginning forge of Story.

Driving must be mentioned, by the way. There is undoubted exhilaration in that first-15- minutes-of-sheer-terror followed by mind-blowing-rip-hell-out-of-curvy-roads fun that is also known as ‘accustoming oneself to right hand drive’. The little VW Golf we ended up with handled like slick damn–both fun and necessity, between the lovely twisty roads and keeping up with the status quo on the motorways. (Status quo=drive like autobahn, b.t.w.) Refreshing, actually, for one who’s foot often follows the pace of one’s thoughts…  But ’tis time for true confession: Amazing Spouse parked the car the first several nights. Because yes, whilst parking a 12-horse lorry doesn’t faze me, the reality of having to put a tiny car in that even tinier space surrounded by stone walls? Aye, I quailed. Like a puling, quail-y thing.

The road to York, the capital for all that Yorkshire independence and determination, a melting pot even before Robyn’s days. Brigantes, Vikings, Romans, Anglo-Saxons, Normans. Eboracum, Eoforwic, Iorvik, Yeork. The seat of archbishops who proclaimed 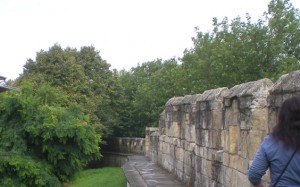 themselves as powerful as the ones in Canterbury. The walls still stand, mostly and miraculously, and We walked the walls of York… all right, we stalked the walls of York, and pretended to hide from our foes behind the sturdy merlons. Stones dating from the 11th century–tell me you wouldn’t have done the same!

We also took in the main gates (or ‘bars’) leading in: Bootham Bar, Walmgate Bar, Mickelgate Bar, and Monk Bar, (pictured) in which lies a museum to Richard III. York is pretty fond of their Richard, not so fond of the Tudor upstart who took his throne. 😉 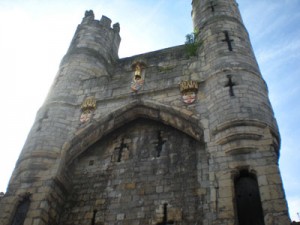 (So, gather round and tell me true: is it a sign that you are ‘way too much a history geek when you ask a question the tour guide can’t answer?  I really wanted to know, too!)

Our B&B, Chelmsford Place, was run by lovely people, restful, and just a short walk from the River Ouse.   The weather was warm and sunny; we’d little need of our waterproof windcheaters. Time being short, we decided upon something we never do–a guided tour. We prefer wandering for ourselves, usually. But we did get to see things we would have missed. For instance the Roman encampment, complete with crypts, excavated amidst the Medieval Gardens: 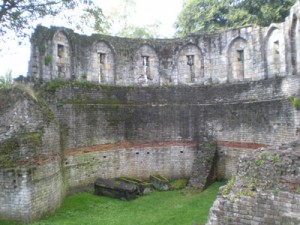 The Abbey of St Mary’s, another victim of the Dissolution of the monasteries 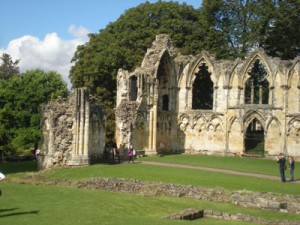 St Leonard’s Hospital, known as the largest one in England after the Norman Conquest, which also succumbed to Henry VIII’s marital tantrums (i.e. Dissolution). I dearly wanted to go into the undercroft and couldn’t (it was closed). 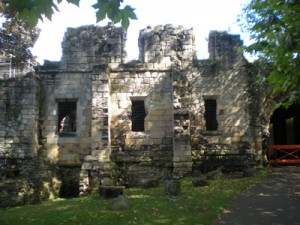 And in no way was I going to miss Clifford’s Tower, the remains of which were originally built by William the Conqueror. The stark beauty of the keep is leavened, like most such things, with a bloody and violent history. It was one of a series of motte-and-bailey keeps erected in the area, stony preface to the brutal Harrying of the North. And in 1190, it was the scene of an horrific massacre of a large settlement of York’s Jews, who barricaded themselves in the tower–in vain–against a backdraft of anti-Semitic fervour. 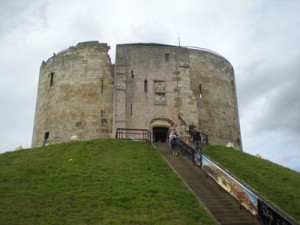 Blood sacrifice always leaves its mark, and a strangely soft and sombre atmosphere remains within the walls of Clifford’s Tower.   It made me think much upon effects and causes; of the underlying atmosphere–the memory–that places can retain, eternal vibrations.

Here’s a small snippet from the upcoming book, Winterwode. I’m thinking I might find an apropos bit for each one of these posts; a connection between the reality of research and how it resonates into the creative space.

“This is his,” Robyn murmured. “All of him, and none of me. Gamelyn was born here, was marked with their prayers and incense. Was raised in these walls, taught to walk and run and fight with the steel rendered from their stones and fire, and he… he feels sommat here, sommat powerful t’ fill him.   But all I hear are the stones… weeping.”

Coming Next–
We walked the Wall… and the Wall won!

Category: research, Travelling Through Time | 2 Comments on I Won’t Begin At The Beginning–

Research books are better than candy…

So, finished the latest WIP.  Not ready to start tackling the dreary task of flaying myself for a readable synopsis and starting to shop it around.  Then one of the books I’d requested from inter-library loan came in.  Which means the burgeoning To Be Read pile has to burgeon just a little while longer… at least this ILL book wasn’t one with a 1 week deadline! Because they have been.

Not only is Gamelyn there, but Thomas of Erceldoune, who was a key player in the Book What Almost Got Movie-d.  I really like reading essays about the ballads; agree or disagree with them, new opinions are always good in some fashion, they trigger more insights.  And with chapters like “Sons of Devils’ and ‘The Anti-Heroic Heart’… I’m really looking forward to this one.

Called Heroes and Anti-Heroes in Medieval Romance, (ed. Neil Cartlidge), it had me from the introduction:

“Anti-heroism in medieval romance is not just about ideological or moral values… Medieval writers and their audiences seem to have been attracted to anti-heroes, not because of any real anxiety about the meaning of heroism, but simply because of the dramatic possibilities it creates… the concept is useful because it helps to explain the different ways in which medieval narratives invite admiration of figures who are obviously flawed, failed, sinister or destructive…”

Though we modern readers also like anti-heroes, I think we are more anxious about the meaning of heroism.  Is it because we have more unrealistic expectations of heroes? Because heroism is always predicated by which ‘side’ views it?  Because we are more aware of such things… or less aware?