Retro Recs — THE KING MUST DIE 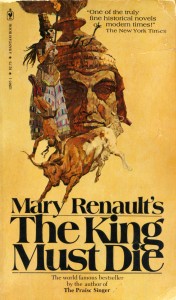 This book began to change all that for me. A retelling of the myth of Theseus, it had an undeniable and firm grasp upon the historical personalities and realities that birth legends. It was that seemingly effortless mix that truly comes only with serious application of craft.  Gritty and sometimes unpleasant, yet nonetheless magical in every sense, the novel makes an impassioned appeal for both the fantastic and the historic–together. It was bildungsroman (woot!) at its finest, warts and all, with an oft-unreliable narrator as hero, displaying both the arrogance and virtues of a deeply-inculturated young man. Not much is shied away from or glossed into comfortable platitudes. You root for Theseus, as well as long to give him a good spanking. 😉

Recently, I heard a writer at a convention recommend Mary Renault–with the caveat, however, that ‘she is old-fashioned’. I was rather appalled at anyone attempting excuses for someone who had more talent in one nib finger than most writers possess in their entire repertoire… but, after all, we all say a lot of silly things when we’re baby writers. Though I truly don’t think I had the brass to assume myself able to take a mammoth with a BB gun. 😉 Not with prose that glides like this:

The Great Court was empty under the moon. Tier upon tier rose the pillared balconies, dimly glowing. Lamps flickered behind curtains of Eastern stuff. The pots of lilies and of flowering lemon trees shed a sweet heavy scent. A cat slipped from shadow to shadow, and a Cretan who looked as if his errand were the same. Then all was silent. The great horns upon the roof-coping reared up as if they would gore the stars.
I stretched out my hands palm downward and held them over the earth. “Father Poseidon, Horse Father, Lord of Bulls, I am in your hand, whenever you call me. That is agreed between us. But as you have owned me, give me this one things first. Make me a bull-leaper.”

————-
No question in my heart, I would encourage everyone to read The King Must Die. Or any of Mary Renault’s books. And come on, I read it at the age of eleven; surely it isn’t that insurmountable an experience. If it is, indeed, ‘old-fashioned’, then bloody DAMN but we need more ‘old fashioned’ in this world.

Category: Books, Much Thinkery About Something, Retro Recs | LEAVE A COMMENT

Retro Recs–First Up: THE IVY TREE

HERE’S the plan: to pull out a book from my tight-packed bookshelves and share it. Qualifications? It has to be one I’ve read over and over again, one that has inspired my own writing, and one that gave me a lasting experience of some sort. There are so many older books that are just too damned good to be buried in the mosh pit of publishing fashions and frenzies. So I’m going to pull them out and have another dance with them. And hopefully encourage others to do the same.
——–
To choose Mary Stewart was a no brainer, actually, though it was difficult to pick between what I call ‘my rosary of three Marys’ (Stewart, Mary Renault, and Mary O’Hara). But once I decided which Mary, it was a little easier to pick the book. I’m sure others will come into play at a later date, but this time, it had to be The Ivy Tree.
——–

From those aforementioned bookshelves, (c)1961, this is the first US printing in 1963. Isn’t this cover just deliciously (and a bit painfully) ’60s gothic? From the sweeping cape and hair to the Barnabas Collins coat and the uphill, defiant pose? From the back cover:  If Mary Grey looked so much like the missing heiress, why should she not be the heiress? To the lonely young woman–living in a dreary furnished room–the impersonation offered intriguing possibilities… So plain Mary Grey became the glamourous Annabel Winslow. Only someone wanted Annabel Winslow missing… permanently.

If you stood on the low piece of crumbling wall that enclosed the trunk, you could just reach your hand into the hole. I held on to the writhen stems of the ivy with one hand and felt above my head into the hollow left by some long-decayed and fallen bough. I put my hand in slowly, nervously, almost as I might have done had I known Julie’s owl and seven mythical young were inside, and ready to defend it, or as I might have invaded a private drawer in someone’s desk. The secret tryst; Ninus’ tomb; the lovers’ tree; what right had a ghost there, prying?

Category: Books, Much Thinkery About Something, Retro Recs | LEAVE A COMMENT