Come over and visit Joyfully Jay’s blog, where I answer one of the most-asked questions about the Wode books and Robyn Hood in particular…
And in the process, comment and have your name put in for a drawing for the e-book of your choosing: either Greenwode or Shirewode. 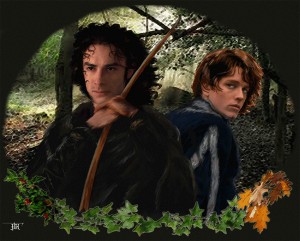 I hate doing synopses.  (I’ve done two in the past month.  Gah.)  But I will confess a sincere and particular aversion to them before writing the novel.   Breaking down a story afterwards can be satisfying, in its fashion; deconstruction is not only useful, but a way of life for anyone serious about writing.

(Of course, my habit of writing a synopsis after I’d written the story did not win me any points in school…)

But when I get a synopsis down on paper, it always sounds so… two dimensional.  Ideas are only that–ideas–and not all of them work when it comes to the work.  Shallow, pat, clinical, all those words that make me cringe.  And when I have to do a synopsis before the fact?

I do get it, I mean, I really do comprehend that a synopsis is a Necessary Evil; but the Eee-vul of that cliché likes to make shrieking noises at me.

How appropriate.  Seeing it’s October, and all.

(Sometimes I think I will never ever get Robyn’s voice out of my head.  Effing ear-worm dialect that I love/hate/love…)

But.  Synopsis.  A synopsis rendered (and yes, in the throes it does feel like slaughterhouse mechanics) before the creative drafting is done is flat scary.  It’s not just a journey into the unknown, but trying to define… no, hoping you can define the unknown… despite it being in a raw, oft-incomprehensible state.  It’s particularly brutal for someone unsure of what the journey will bring, who dives into rapids just hoping to get brained by submerged rocks of inspiration.  My own working structure builds and layers atop itself; at first stepping on air, then mists, then a wobbling and quaking hint of something with a fall or two into the Abyss of Incoherence.  But the more determined the steps, the more the structure spans itself into powerful solidity.

So, if someone puts forth the seemingly innocent phrase of “That sounds interesting, shoot me a synopsis” and wonders why I’m mute and wide eyed with my gob hanging half-open?  This is what I’m thinking, assuming I can think just then:  OMFG, what if I don’t know what they’re going to tell me, because they’re like that, you know, they grab me by the hair and drag me along, will-me, nill-me and yes, while sometimes I know very well where I’ll end up, it’s just as true that I usually have no effing CLUE how I’m going to get there…

(Some writers are frustrated Directors, some are discouraged Set Designers, some want to Design Cool Props, some want to be Producers, some are Grumpy Extras scribbling in the background… I am that vilified/sanctified/oft-annoying wierdo known as the thwarted Method Actor.)

So I regain control of my expression, mumble “Erm, sure, do my best”.  But really?–there’s this internal backing away slowly happening, fearing the faery dust cupped in my palms will prove to be grave ash when winnowed down to dry bones without the muscles and ligaments and flesh… the soul and spark… that makes magical Story from clunky Structure.  Reptile Brain knows first drafting so much better than Frontal Lobe.  Frontal Lobe has a work ethic like damn, but Reptile Brain is of serpent kind and, therefore, more clued in.  The archetype of dualities, knowledge, all that.  Reptile Brain is instinct and feeling and being, and curls up in all that warm faery dust like Smaug in his pile of dwarvish gold.  Frontal Lobe has no business even being around faery dust.  Frontal Lobe would think the skull needs a good sweeping.  Frontal Lobe is a bossy, conniving bastard who is hard core about distance maintenance and stiff self-edits and ‘you said that 10 bloody times already’ and ‘this ain’t working, chuck it NOW’.

Frontal Lobe is very useful, don’t get me wrong.  But FL isn’t afraid of much, which says how smart FL is.  Reptile Brain fears much, for it is wise, but it’s kind of a crap editor.  Being entirely too purple sometimes, and all that…

Hmm.  Perhaps I shouldn’t say I hate synopses.  But I do fear them.  And I can only hope that’s wise.

Because I still have to bloody well do them.

Category: Midnight Confession, Much Thinkery About Something | LEAVE A COMMENT